REVIEW: Don't Judge a Girl by Her Cover (Gallagher Girls #3) by Ally Carter 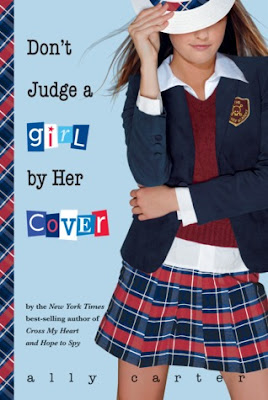 When Cammie "The Chameleon" Morgan visits her roommate Macey in Boston, she thinks she's in for an exciting end to her summer break. After all, she's there to watch Macey's father accept the nomination for vice president of the United States. But when you go to the world's best school (for spies), "exciting" and "deadly" are never far apart. Cammie and Macey soon find themselves trapped in a kidnappers' plot, with only their espionage skills to save them.

As her junior year begins, Cammie can't shake the memory of what happened in Boston, and even the Gallagher Academy for Exceptional Young Women doesn't feel like the safe haven it once did. Shocking secrets and old flames seem to lurk around every one of the mansion's corners as Cammie and her friends struggle to answer the questions, Who is after Macey? And how can the Gallagher Girls keep her safe?

Soon Cammie is joining Bex and Liz as Macey's private security team on the campaign trail. The girls must use their spy training at every turn as the stakes are raised, and Cammie gets closer and closer to the shocking truth.

Okay, many of you don't know this yet... but the Gallagher Girls series is one of my favourites, EVER! The cover, as always relates so much to the school, they all have a powerful colour theme, and they are undoubtably awesome. I also love the other covers:
With all the objects they are holding relating to some part in the story.

When Cammie accepts the opportunity to go with Macey to Boston as they rehearse their perfomance with the senator, Cammie can't help but feeling as if something or someone is always watching her. Then they attempt to kidnap Macey... Oops. As the secret services become involved, Aunt Abby makes an appearance and everyone working secretly behind one-anothers backs to solve the mystery, Cammie's suspicions start to build that there are more secrets to the Gallagher Academy than she ever knew possible.

Cammie is an awesome character, she stays calm, plans efficiently and can be very secretive at times. But sometimes her plans can fall when a little someone gets in the way *cough* Zach *cough*. However, she is very professional at all times and is not deterred from near-impossible situations. She is kind, friendly and will always do whats best for her friends and family.

We then have her three best friends, Liz, Bex and Macey. Liz is intelligent and when I say intelligent... I mean intelligent.  Bex is feisty, will jump-in-head-first and will never back down from a challenge. And Macey is probably one of my favourite characters of all, the change from when she first set foot in the Gallagher Academy to the present is just massive, but I also like the new her. She is also very good, taking into consideration she has only been there for one year, she seems to be well driven to reach to her friends level and beyond. She is also a very ambitious and dangerous character who could strike fear into anyones eyes, especially those who are about to see her inner spy.

Like the first and the second book in the series, Ally Carter definitely does not disappoint. There is more danger, suspense and secrets than ever of which will drive you crazy... but in a good way :0) There is also more mystery around the history of the Gallagher Academy and the lengths they would go to to keep the secrets in the Gallagher Academy exactly like that, they stay inside and are never released. You see the struggle of friends and family releasing one of their own head first into danger and the extent best friends would go to, to keep their friends out even if it means risking their own life and future. We also see a special appearance from a very overprotective someone... well, lets just say I don't mind! And then Mr Solomon and Aunt Abby, oh dear, I can't stop laughing *wipes tears from eyes*.