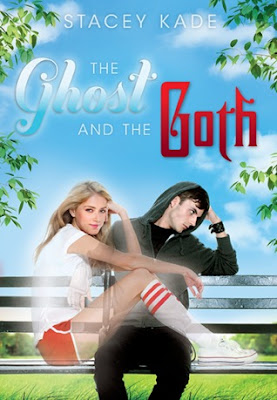 
Alona Dare–Senior in high school, co-captain of the cheerleading squad, Homecoming Queen three years in a row, voted most likely to marry a movie star… and newly dead.


I’m the girl you hated in high school. Is it my fault I was born with it all-good looks, silky blond hair, a hot bod, and a keen sense of what everyone else should not be wearing? But my life isn’t perfect, especially since I died. Run over by a bus of band geeks—is there anything more humiliating? As it turns out, yes—watching your boyfriend and friends move on with life, only days after your funeral. And you wouldn’t believe what they’re saying about me now that they think I can’t hear them. To top it off, I’m starting to disappear, flickering in and out of existence. I don’t know where I go when I’m gone, but it’s not good. Where is that freaking white light already?


Will Killian–Senior in high school, outcast, dubbed “Will Kill” by the popular crowd for the unearthly aura around him, voted most likely to rob a bank…and a ghost-talker.
I can see, hear, and touch the dead. Unfortunately, they can also see, hear and touch me. Yeah, because surviving high school isn’t hard enough already. I’ve done my best to hide my “gift.” After all, my dad, who shared my ability, killed himself because of it when I was fifteen. But lately, pretending to be normal has gotten a lot harder. A new ghost—an anonymous, seething cloud of negative energy with the capacity to throw me around—is pursuing me with a vengeance. My mom, who knows nothing about what I can do, is worrying about the increase in odd incidents, my shrink is tossing around terms like “temporary confinement for psychiatric evaluation,” and my principal, who thinks I’m a disruption and a faker, is searching for every way possible to get rid of me. How many weeks until graduation?

Okay, first the cover is undoubtedly bright and colourful making it stand out immediately. Its also a bit like she is the light to his dark.

Alone is perfect... to the untrained eye. However, she is that one girl in all schools who is pretty, popular and gets her own way, always. But she is not perfect, especially when she gets hit by a bus, of  which kills her. Now, as you would expect, she has a large number of enemies and a mountain of things she has done wrong in her life that need to be made up for; meaning she does not go into the light and so instead is left to roam the earth to redeem herself and earn the reward of moving on. But her first encounter as a ghost is Will... who laughs right in her face (*shouts* G-O-W-I-L-L, what does that spell? GO WILL *giggle fit begins*) How was he to know that The Alona Dare was destined to roam the earth alone? But he has also put his foot in it... as he is the only one of which ghosts know of, who can see ghosts. Will Will (no pun intended) be able to help Alone? Or is it best to leave her be and let her feel bad for the things shes has done to others?

Alona Dare is a really strange character. In a way I really wanted to hate her because of all the mean things mentioned that she has done to others and her Miss Perfect persona, but I ended up liking her character as she was very funny and in a way, her bossiness came in handy when controlling all the ghosts. She always gets her own way and can easily control a room as soon as she steps over the threshold, but you also see some real emotion seep through, especially where her mum and dad are concerned. I also think she handles the situation of her friends well. Well, as well as you can knowing they have always disliked you and don't-give-a-monkeys that you are now gone... what friends! Though she really surprised me at the end by how much emotion went into that one scene (you will instantly know which one... Clue: Her mum.)

I really liked the character of Will. He didn't appear to care what others thought of him and so got on with his life which was really nice to see. He also isn't perfect, as he struggles to hide his contact with the ghosts around from his mum and ensure her he is not lying. It doesn't really work out right, meaning he is aloud to listen to music in class (no fair! But I guess its better for him to concentrate on his music than alert the ghosts to his presence) to keep out 'the voices'... not that he is complaining. He is a great character, who is aware of his surroundings, and I am glad to say, slowly comes round to the idea of passing his exams. Yay, GO WILL! The relationship between Will and Alona is adorable, even though he originally wanted her to get as far away from his as possible due to her talkativeness and moaniness, but they begin to build a slow but happy relationship. They are both very funny with some very sarcastic comments and laugh-out-loud moments, but they both have a lot of focus and so keep to their 'missions'.

The plot was really good, I also love the involvement of Wills friend which gave more mystery and suspense to the situation. Also the 'seething cloud of negative energy' is really scary, I mean, we don't even know what it does let alone how to fight it! This was a lovely read of which made you smile and reconsider the image of Miss Perfect and that they are not always as they seem... sometimes. And that the goth kid isn't always a goth just because they always wear dark coloured clothes, Alona did expand his wardrobe to a grey t-shirt though!

I highly enjoyed this book, the next book in the series: Queen of the Dead.