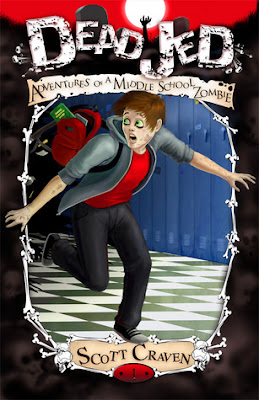 Dead Jed is Shaun of the Dead meets Diary of a Wimpy Kid. Jed's not your typical junior high geek. He is, to use the politically-correct term, cardiovascularly-challenged. And while his parents have attempted to shield him from the implications of being 'different' for as long as they could (Jed was 8 and at a friend's sister's birthday party when he blew his lips off onto the cake in front of everyone, finally prompting the “Big Talk” from his parents and an emergency SuperGlue repair by his dad), 7th grade at Pine Hollow Middle School as a target of Robbie the supreme school bully and his pack of moronic toadies is rapidly becoming unbearable.

From being stuffed in a filled trash can as “dead meat” and into a trophy case as the bully's “prize,” to literally having his hand pulled off in the boys' room (Jed's always losing body parts. Luckily, a good stapler and some duct tape and he's back in the action) and a cigarette put in it and try to frame him for the recent reports of smoking in the school, Jed's had enough and is ready to plan his revenge. Besides, it's awesome what you can do when you're already dead!

Fun and quirky, this story will definitely make you laugh but also understand the life of a real zombie! The cover is fun, bright and colourful immediately catching your attention. It would greatly appeal to younger readers.

Jed / Dead Jed / DJ has been a zombie ever since he was born. However, he is as down to earth as anyone could ever get, but when he starts 7th grade he immediately comes in contact with the school bully. But when Jed has finally had enough, he pulls the biggest revenge plan any dead guy can pull. Besides... he's already dead!

Jed is an hilarious character; he is funny and unique, always making you smile and laugh out loud! He is also a very clever zombie, especially with his acts of revenge I could not stop laughing. I also loved the how he repaired his limbs; as a Zombie Jed's arms and body parts may fall off with only the slightest pressure so he always brings duct tape and staples with him... There isn't really much he can do about the ooze!

I love the way that Scott has made his ideas of Zombie's very unique; how people treat him and how the usual Hollywood stuff isn't true. It has shone a new light on Zombies. There were also a few funny icky scenes, for example: how his skin peels off and that his limbs can just be pulled off, Robbie's reaction to the ooze was hilarious!

This story is a light fun read which will have you laughing in seconds. It is unique and quirky, where Zombie triumphs over evil.  GO ZOMBIES! Wahoo! 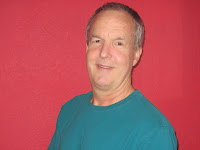