REVIEW: Shut Out by Kody Keplinger 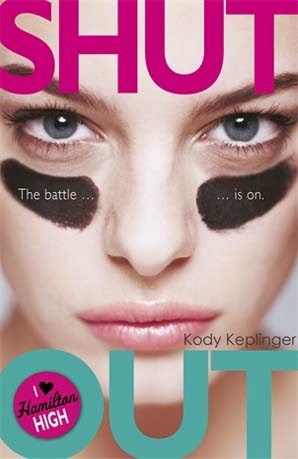 Shut Out by Kody Keplinger
Published by Hodder Children's Books on 5th June 2014
Pages: 336
Source: *Received from Publisher in exchange for an honest review* Thank you!

The girls of Hamilton High School are going on strike.

Sick of the rivalry between their boyfriends' American football and soccer teams, Lissa and her friends are determined that the boys won't see any action from them until they put an end to their immature pranks.

But Lissa hasn't counted on a new sort of rivalry: an impossible girls-against-boys showdown that hinges on who will cave to their libidos first...

My expectations of this novel were high as I have never read a Kody Keplinger book before, though I know everyone loves them. However sadly, this was just not my cup-of-tea. The cover is brilliant, being really bright it stands out clearly though I felt the war stripes were, to me, misleading.

At Hamilton High, there has been a war between the American Football players and the Football players for as long as anyone can remember, though no-one knows 'why?'. When Lissa alongside the other girlfriends of both the sport teams can't take the rivalry anymore, they decide to go on a strike. As their relationships are put to the ultimate test, can they really end the rivalry for once-and-for-all or is it now a lost cause?

Lissa was a character whom I was unable to connect with, at first she really thought about everything and appeared intelligent but she soon became selfish and did not seem to contemplate other peoples feelings; she appeared to become very sorry for herself half-way through the novel. The character, for her personality, who I enjoyed reading about most was Lissa's best friend Chloe. Chloe was bubbly, said-it-how-it-is, and did not hold back. She added some humour to the novel.

Now the plot. The plot. I think the idea was brilliant, how they stood their ground really sends a message to readers of how you have a choice. Though I, from the cover and synopsis, was expecting a St Trinians style war which meant I was disappointed, especially as they only seemed to communicate with one another and not with their boyfriends; it felt as though something else needed to happen. But, I do think the message that is conveyed was very important.

Sadly I was unable to connect with our protagonist and I felt the plot was too slow paced; it had no 'WOW' factor and the ending, though cute, was predictable. However, despite my disappointment from this novel, I definitely want have another go and read another Kody Keplinger novel, especially The DUFF.