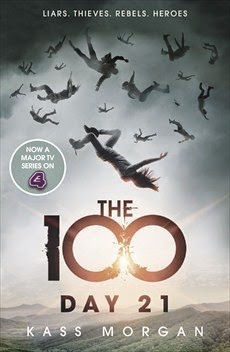 Day 21 by Kass Morgan
Series: The Hundred #2
Published by Hodder & Stoughton on 25th September 2014
Pages: 311
Source: *Received from Publisher in exchange for an honest review*

In this pulse-pounding sequel to Kass Morgan's The 100, secrets are revealed, beliefs are challenged, and relationships are tested. And the hundred will struggle to survive the only way they can - together.

It's been 21 days since The 100 landed on Earth. They're the only humans to set foot on the planet in centuries... or so they thought. Facing an unknown enemy, Wells attempts to keep the group together. Clarke strikes out for Mount Weather, in search of other Colonists, while Bellamy is determined to rescue his sister, no matter the cost. And back on the ship, Glass faces an unthinkable choice between the love of her life and life itself.

A brilliant and captivating sequel to The 100! I love the cover, I am never usually a fun of TV series/movie covers however this is certainly an exception (except that permanent sticker!).

100 prisoners are sent down to Earth, on a quest to determine whether Earth is now survivable. Relationships are tested, friendships are tested and trust is tested. But soon these are the least of their worries as they find out they are not alone. In the sequel, you follow The 100's quest to find Octavia and how they are learning to survive alongside controlling their fear of the Earthborns, whilst in the sky Glass and Luke need to make their choices and fast, as the Arc begins to lose oxygen.

I loved seeing the continuation of the different perspectives of our main characters, Morgan does it perfectly as at not one stage did it become confusing as to who was who. I was ecstatic to see an improvement of Clarke's character in Day 21, she appeared less selfish and tried her hardest to do what she thought what was right; she fought for The 100. Bellamy was as amazing as ever, he was protective of others and did not give up until he had what he wanted. Alongside this he was compassionate, and we were able to see a different side to Bellamy as we gained an insight into his past. Then we have Glass and Luke, I am still not sure what to think of Glass. At one point she seems completely unselfish, and then the next she seems the opposite. In comparison to Luke who is lovely and caring, and would do anything for Glass.

The plot of Day 21 was engaging and had a few edge-of-your-seat moments. There were raging arguments and secrets spilled, alongside new adorable friendships. Additionally you also get to learn more of the history of the Arc and Earth, answering some of your unsaid questions along the way. The scenes on the Arc will definitely pull at your heart strings with the dark truth of peoples desperation for survival, and to what extent they will go to for it.

This is definitely my favourite novel in The Hundred series so far, and I cannot wait for the sequel: Homecoming.