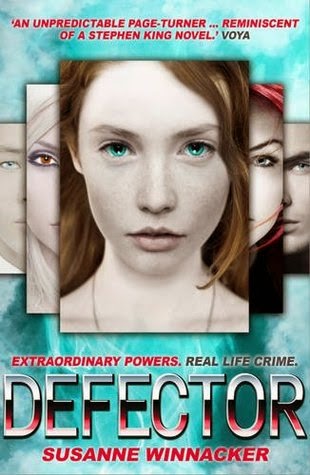 Tessa has made peace with her life as a Variant. She and longtime love Alec are officially a couple, and for the first time, she has everything she wants.

But the air is tense at FEA headquarters. An agent has disappeared and rogue Variant organization Abel's Army is likely the culprit.

When Tessa is summoned for her second mission, she is unexpectedly launched into a massive conspiracy. Her best friend Holly is kidnapped, and Tessa knows it was meant to be her. But who is after her? And more importantly, why?

When the FEA's efforts to rescue Holly don't yield results, Tessa takes matters into her own hands. Desperate to save her friend and uncover the mystery behind Abel's Army, Tessa launches her own investigation - but nothing could prepare her for what she finds.

Finding the truth will take her out on the road and out of her comfort zone, with danger lurking at every turn. Summoning all of her courage and strength, Tessa must decide who can be trusted and what is worth fighting for. Her final decision will leave readers breathless.

A fast-pace and electric read, the perfect sequel to IMPOSTOR. I admit the cover is awful! The first cover I loved but this cover... I definitely prefer the US cover; it is beautiful!

Tessa feels as though all has settled. She has completed her first mission and she has the man of her dreams. Until an abrupt second mission goes wrong, and her best friend is kidnapped by their worst enemy. Abel's Army. But what Tessa soon discovers is that some like to keep their friends close, but their enemies even closer...

Similarly from Impostor, our main character Tessa is a delight to read about. Tessa is caring of others and will do anything it takes to save the ones she loves. I also loved the way she stood her ground, instead of going along with what everyone had done and accept it, she took action and did not just go running back because it was easier; she was independent and made her own choices! I also loved the friendship between Tessa and Devon, they stuck by one another and made each other happy.


'Did you tell your parents?'
'Oh yes. I thought I had done magic and was convinced I'd get a letter to Hogwarts in no time.' His chest shook under my head as he chuckled. 'My parents thought I was exaggerating. They stopped reading me Harry Potter that evening.'
Defector by Susanne Winnacker, Paperback page 219

The plot of this novel was completely unexpected, it took you in directions you never expected. I also loved the spin on the background characters, how they were secretly involved and you never knew, alongside the world outside of the FEA headquarters. There is action, danger and suspense, alongside an adorable friendship that will have you cheering like cheerleader.

Defector is certainly a must-read for all, especially X-Men fans as their abilities will leave you stunned. Thrillingly engaging with edge-of-your-seat moments, Defector will certainly make your jaw drop alongside being deliciously page-turning and addictive, you won't be able to turn the pages fast enough.