REVIEW: The Deep (The Island #3) by Jen Minkman 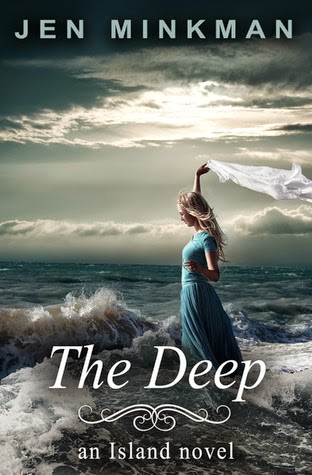 The Deep by Jen Minkman
Series: The Island #3
Published by CreateSpace on 3rd June 2014
Pages: 200
Source: *Received from the Author in exchange for an honest review*

‘The world is never-ending.
I never realized just how much space there is – how far and wide the water around our island stretches out. Somewhere in the back of my mind, I may have believed that a second Wall ran around Tresco, containing the infinite waters so we wouldn’t all wash over the edge and plummet down into the depths.’

Leia and Walt are on their way to the Other Side, where the legendary land of Cornwall awaits them. Tony, their new friend, has told them that all wars of the past have been forgotten and the citizens of Bodmin and Dartmoor live in peace. People adhere to the tenets of an old religion that preaches forgiveness and non-violence.
However, Walt and Leia soon discover that even a peace-loving, ideal society like this one may have its flaws. While on a forbidden trip to Exeter, the old city of their ancestors, the two Islanders discover more about the new world than they ever bargained for.

Secrets run dark and passions run deep in this thrilling conclusion to the Island novella series.

The first two books in The Island trilogy are The Island and The Waves.

The Deep is a thrilling novel that represents the passion and importance of cooperation between communities, but also reinforces the idea of forgiveness and how others can truly change for the good. The cover is certainly my favourite in the trilogy, it expresses the freeness the characters experience alongside venturing into the unknown!

When Leia and Walt leave their home for the first time, they never thought they could experience more than they have already suffered. But when they take a secret trip to Exeter, they soon put their lives in danger as they escape being the first to never be ill from the radioactivity. Whilst back home, they try to stop a revolution group from destroying their boats to enable them to set sail alongside long-kept secrets revealed.

Our main protagonists Leia and Walt are a refreshing pair. They do not have the stage where they go “oh, should we really be together because of this or that?!” they get on and just do it, meaning I strongly admire this quality in them. It was also interesting to see Minkman’s perspective on the reaction of people to technology they have never seen before; I love seeing how an author approaches this topic and lets just say Minkman is one who did it well.

A character who I probably enjoyed reading about most was Alisa. She was feisty and stood her ground, paired with Saul they were unstoppable together. It was also intriguing to study Ben’s perspective of it all as he battled with his emotions surrounding his brother and those around him, whilst being in a completely new environment.

The plot of this novel to begin with was rather slow, until we got past 50% of the novel it began to pick up and the danger heightened alongside the action and danger. The imagery within the novel was captivating, especially the ending and action scenes; they were incredibly engaging and thrilling I was completely engrossed within the plot.

This is a perfect and satisfying conclusion to the trilogy, I will be sad to see it go! I am certainly looking forward to and future novels by Minkman.