REVIEW: All Fall Down (Embassy Row #1) by Ally Carter 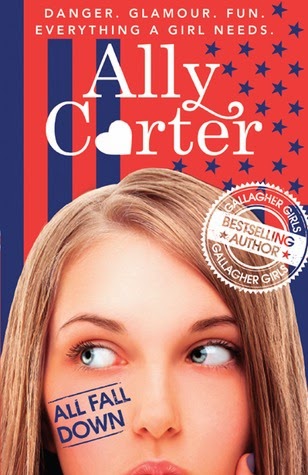 All Fall Down by Ally Carter
Series: Embassy Row #1
Published by Orchard Books on 5th February 2015
Pages: 320
Source: *Received from NetGalley in exchange for an honest review*

Grace can best be described as a daredevil, an Army brat, and a rebel. She is also the only granddaughter of perhaps the most powerful ambassador in the world and Grace has spent every summer of her childhood running across the roofs of Embassy Row.

Now, at age sixteen, she's come back to stay - in order to solve the mystery of her mother's death. In the process, she uncovers an international conspiracy of unsettling proportions, and must choose her friends and watch her foes carefully if she and the world are to be saved.

Smart and engaging; Carter has gone and created another promising series! I really like the cover, it is adorable and perfect for the novel; it just makes me want to know what is inside.

When Grace is sent to live with her Grandad, the only thing she can think about is solving the mystery of her Mother's death, but when you are living in Embassy Row you can keep nothing a secret. With some of the worlds most powerful people in one place, can Grace solve the mystery before history repeats itself?

Sadly one of my only problems with this novel was our main protagonist Grace. I felt at times I was unable to connect with her alongside her being rather boring on occasions. However, I really liked her friendships and instead of sitting around she wanted to do something about the problems occurring.

The plot of this novel was just what I had hoped for. It was fast-pace, captivatingly dangerous, action-packed and fun. Though I felt it was a little darker than her previous series, it certainly kept you guessing and I could not stop reading until I had finished! Even one week later and my mind is still thinking about it! The plot took so many unexpected twists and turns, though the main one was rather simple to figure out if you read closely.

Carter has done it again! A brilliant action-packed, slightly emotional and dangerous novel that will certainly keep your brain thinking!