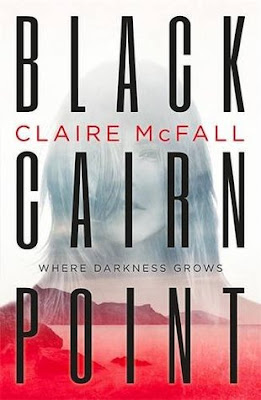 Black Cairn Point by Claire McFall
Published by Hot Key Books on 6th August 2015
Pages: 252
Source: *Received from the Publisher in exchange for an honest review*

Two survivors, one terrible truth.
Heather agrees to a group camping holiday with Dougie and his friends because she's desperate to get closer to him. But when the two of them disturb a pagan burial site above the beach, she becomes certain that they have woken a malevolent spirit. Something is alive out there in the pitch-black dark, and it is planning to wreak deadly revenge.
One year later Heather knows that she was very lucky to escape Black Cairn Point but she is still waiting for Dougie to wake from his coma. If he doesn't, how will she prove her sanity, and her innocence?
A chilling and atmospheric thriller from unflinching and award-winning writer Claire McFall.

I was shocked by how good this novel was, especially because of how small it was I was worried that you would not get the full impact of the novel. However it completely worked and was the perfect size; very creepy and addictive! I love the cover, the colours are dark and creepy, with her face in the background it seems almost ghost-like.

When five friends go on holiday together to an isolated beach for Dougie's birthday, the last thing they expect is for only two to leave alive. But having woken a malevolent spirit, how can one prove such a creature exists, when it is believed to be a myth?

Some of the characters in this novel I felt are purposely made for you to hate, like Darren and Emma; I really strongly disliked them. Martin was a secondary character whom I really liked, being the only person who actually stood up for themselves he was a strong and independent individual who was a great friend to Heather and Dougie. Then we have out main protagonist Heather. She was strong, seeing people for who they really were and I liked her for that. She did not just always follow her best friend and instead made her own decisions. Until it came to Dougie and she would go flinging herself into his arms! Which leads me onto Dougie, in places he was an okay love interest, but at points he did seem rather controlling and frustrating.

Though the plot, so addictive and thrilling I was unable to put it down. In just one simple setting McFall created a mystery that really captures the attention of the reader. Alongside this I loved the use of historical tales of myths, dark sacrifices, and dark arts, it added a dark and vengeful tone that made the novel rather twisted but could not help being intrigued by and yet be on the edge of your seat. One of the things that worked well was the use of the 'Then' and 'Now'. It added more depth to the novel and made it that more twisted to witness, though there was a couple of info-dumps and the plot did feel a little rushed towards the end, I could not help but remain captivated. As for the ending, I am no entirely sure if it was predictable or not, on one part it is, but I did not expect the other side to it and why and this did certainly leave me shocked!

Overall, this was a thrilling and spine-tingling novel that will certainly have you addicted. I definitely will be reading McFall's previous and future works.