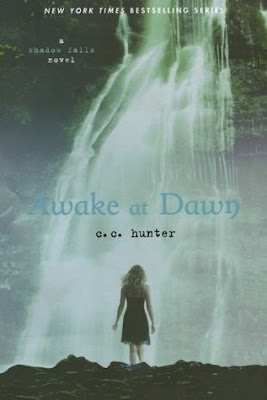 Step into the world of Shadow Falls, a camp that helps teens tap into their special... talents. Once you visit, you’ll never forget it—and you’ll never, ever be the same.
From the moment Kylie Galen arrived at Shadow Falls Camp, she’s had one burning question: What am I? Surrounded by vampires, werewolves, shape-shifters, fairies and witches, Kylie longs to figure out her own supernatural identity…and what her burgeoning powers mean. And now she’ll need them more than ever, because she’s being haunted by a new spirit who insists that someone Kylie knows—and loves—will die before the end of the summer. If only she only knew who she was supposed to save. And how...
But giving Kylie the most trouble is her aching heart. Gorgeous werewolf Lucas left camp with another girl, but he’s still visiting Kylie in her dreams. And Derek, a sexy half Fae who’s always been there for her when she needed him, is pushing to get more serious—and growing impatient, especially when Lucas returns. Kylie knows she needs to decide between the boys, and it’s tearing her up inside.
Yet romance will have to wait, because something from the dark side of the supernatural world is hiding in Shadow Falls. It’s about to threaten everything she holds dear... and bring her closer to her destiny.

Last week I started to reread this series again. I read the first four books in this series in 2012 and absolutely loved them, yet I never read the fifth and final one. I feel this series is perfect for when you need a loving set of novels, that are easy to read, has some action, a strong female protagonist, addictive secondary characters and a swoon-worthy love triangle. And please don't be put of by the love triangle, because I usually strongly dislike them, yet this one is just so addictive! I love the covers of this series, the colours are beautiful and just simple; they really give you a taste of the world Kylie is living in.

Kylie is a mystery. An unknown supernatural, who won't reveal her brain pattern. Yet currently this is the least of Kylie's worries. With the threat from a new spirit speaking of the death of someone close to Kylie, Kylie must solve this new spirits mysteries, whilst trying to evade the threat of a deadly gang whom claims she is to be wed to the leaders evil son.

Kylie as a character has grown so much since the first novel, and I loved seeing her strength grow throughout the novel. Kylie is a powerful female protagonist, who for once doesn't feel compelled to have a go and blame everyone else for what is happening to her, and claiming she is the all powerful, which I feel happens way too often in young adult fiction. Kylie is kind, loving and happy. Although stuff happens, she still remains there to help and protect those around her, alongside her sense of humour which will certainly have you laughing to yourself!

I believe one of the most rewarding aspects of the novel is the secondary characters, and Kylie's friendships with them. Della is snarky and has such an addictive dry sense of humour, with little sayings that you just have to reread because of how comical they are, alongside how she just says what is on her mind, yet I was also pleased to see a more sensitive side to Della, and not just the big bad vampire act. Then there is Miranda, bubbly and sarcastic, she is a refreshing character whom too will cause you to giggle.

Then we have the romance. In this novel I did feel it took more of a step back, which I was pleased with. However, when I originally read this series, I was completely Team Derek all the way. But now I have read it, three years on, to me Derek seems rather creepy and a bit of a 'space-invader'. He just seemed to whine all the time, which was such a shame to see, so I am hoping goes back to his normal self in the next book. Therefore at the moment, I am totally Team Lucas!

The plot of this sequel was brilliant, fast-paced and shocking, I was very surprised when I finished by how much Hunter fit in without scenes feeling rushed. This series is just so addictive. I loved the surprises along the way, with a few rather emotional scenes that give this series a more realistic feel. And the action. There was certainly plenty of it; Kylie really kicked-butt! I also loved being on the journey with Kylie discovering her abilities, for it has you speculating alongside her, making you feel more connected to her as a character. I believe one of the main things I love about this series is the whole idea of the camp, I can just visualise it all in my mind and is such a brilliant setting for this series.

Overall, this second instalment in the Shadow Falls series was addictive, fun, swoon-worthy and emotional. I cannot wait to read Taken at Dusk.