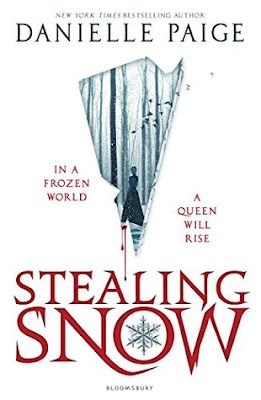 Seventeen-year-old Snow lives within the walls of the Whittaker Institute, a high security mental hospital in upstate New York. Deep down, she knows she doesn't belong there, but she has no memory of life outside, except for the strangest dreams. And then a mysterious, handsome man, an orderly in the hospital, opens a door – and Snow knows that she has to leave …
She finds herself in icy Algid, her true home, with witches, thieves, and a strangely alluring boy named Kai. As secret after secret is revealed, Snow discovers that she is on the run from a royal lineage she's destined to inherit, a father more powerful and ruthless than she could have imagined, and choices of the heart that could change everything. Heroine or villain, queen or broken girl, frozen heart or true love, Snow must choose her fate …
A wonderfully icy fantastical romance, with a strong heroine choosing her own destiny, Danielle Paige's irresistibly page-turning Snow Queen is like Maleficent and Frozen all grown up.

I have been reading Stealing Snow for the whole of August, a whole month, and only read 48%. Sadly I have no interest in carrying on, mainly because I do not understand what is going on. The beginning was very intriguing and the setting was one I had never read about before, so I could not wait to read on. However, it is almost like it just hit a brick wall, things seemed to happen far too quickly without explanation, and I just completely lost interest. I do love this cover though, it is rather eerie and spooky. I much prefer it to the US cover.

Stealing Snow is a retelling of the Snow Queen. Snow has been at the Whittaker Institute, a mental hospital, for the majority of her life, after an attempt to walk through her mirror. However, with strange dreams becoming more consistent and the meeting with a strange man, Snow finds herself in Algid, a land frozen by the evil King, and her true home. Although, Snow soon finds out about the royal lineage her mother tried to protect and hide her from as she soon has a price on her head.

I did like our protagonist Snow. Being in a mental hospital, I was pleased to see she was strong and questioned the awful actions of others, and what they were giving her. She was intelligent and perceptive, whilst caring about those around her. However, the other characters in this novel just seemed to fall flat. Many had little or no character building and just seemed to appear and disappear throughout, meaning the relationships that were apparently built between them just seemed as though they were plucked out of thin air, and became 'insta-friendship'. Whilst on the topic of 'insta-friendship', the insta-love between Snow and Kai might as well have been declared in the beginning. For the first day or two he seems to hate her, then BAM! He kisses her and claims his undying love for her! What!? Thank goodness she had the other guy she was looking for, otherwise they would have been declaring their undying love for one-another in the first quarter of the book!

The plot. Oh! I was so looking forward to this. I am a big fan of Danielle Paige's Dorothy Must Die series, and so could not wait to read another series from her. There was so much potential, yet it all seemed to fall flat. Things seemed to happen way too fast with little explanation leaving the reader feeling as though they have just been in a tornado of words which make little sense to them. There were a lot of mysteries and questions posed by the reader throughout, yet although I know many answers occur at the end, with this plot and novel we really needed some of those answers brought forward to enable us to make more sense of the plot. That therefore leads me onto the world building. I have praised Danielle Paige throughout all the Dorothy Must Die novels for her amazing world building and descriptions, yet sadly in this novel it was such a shame to not witness any of that magic; I just became very confused, bored and rather fed-up.

It was such a shame to have to DNF Danielle Paige's new book Stealing Snow having thoroughly enjoyed her previous works, yet the lack of world-building and answers, left me rather confused and fed-up.