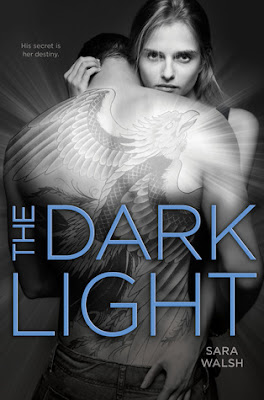 Mia is torn between two guys—and two worlds—in this epic, romantic fantasy.
Mysterious lights have flickered above Crownsville for as long as Mia can remember. And as far as she’s concerned, that’s about the only interesting thing to happen in her small town.
That is, until Sol arrives. Mia’s not one to fall for just any guy, but she can’t get Sol—or the brilliant tattoo on his back—out of her mind.
Then Mia’s brother goes missing, and Mia’s convinced that Sol knows more than he’s sharing. But getting closer to Sol means reevaluating everything Mia once believed to be true. Because Sol’s not who Mia thought he was—and neither is she.

This novel has taken me quite a while to read, I must say partly due to my studies having taken over a bit, but also the fact that I just found this novel really rather slow. I do like this cover though, yet I was certainly expecting more of a mystery than what I got.

Crownsville is a small town in the middle of no-where, nothing happens in Crownsville, but over the past year, young boys have been disappearing. The only information they have is that they disappear into a bright light, that flickers randomly around the town. When Mia's brother goes missing, she goes after him, but the truth is far from what she was first expecting.

The characters in this novel were great. I did not love them, but Walsh explored their personalities just enough for the reader to be able to connect with them. I liked our main protagonist's fire and determination, she was courageous and kind, certainly a character whom you will root for. Sol is a bit of a quirky character, I liked him, he too was kind and caring, which I find in young adult novels they sometimes seem to lack, either because the author is trying to make them too courageous or too powerful.

However, it was the whole relationship that was going on. Going into this, the summary does give the away the fact that there is a love triangle, so I was fully prepared for it... yet I am happy to report that it really was not much of a love triangle! Thank goodness! Mia got over the over guy only a few chapters in, in favour for Sol. But this is where I did get a bit frustrated. They spent three quarters of the book denying their attraction towards one another, then BAM! "Oh I love you, I have always loved you!" Whoa, where in the world did that even come from?! It just felt far too forced, and just seemed to be there in order to please the reader, which was such a shame.

The plot of this novel was certainly unique, and refreshing. I have not read a novel in a long time about alternate worlds and so it really was brilliant and addictive. Walsh did a brilliant job in the imagery throughout this novel, at times I could close my eyes and just imagine the scenes happening! I was also pleased to see quite a few fast-paced action scenes, as it really brought the novel to life. I think the main issue I had though with the plot was that it could be very slow, and certainly sometimes it felt rather repetitive; the inner monologues felt repetitive and certain scenes just seemed to go on and on doing the same thing.

It was the ending. I mean really?! Really?! I just could not comprehend how they could just let them, without any thought... I just don't know, and obviously I do not want to give spoilers, so I will stop here.

Overall, I did enjoy The Dark Light and am pleased it is a stand alone, as I have started far too many series. The world building was amazing and the characters were great, but it certainly had areas that really slowed down the novel and made one sit back and question what they had just read.